WHILE you are all at home baking, clapping and crying we wanted to dig into our archive and show a little more of our books in the hope it might enrich a few mornings. Many of you will know our very first book, ‘I’ve lived in East London for 86.5 years’ but at this time of vulnerability for the old it seems fitting to start at the start and let Joseph remind us just how funny, sad, bonkers and fragile this life is.

Joseph didn’t understand social distance. He thought everyone was wonderful. Over to you, my dear beautiful friend. You started our publishing company. You just didn’t know it.

‘I’ve never left England. I would have liked to have seen islands and jungles and trees and animals and fish and elk and mountains. But I’ve lived in East London all my life and that’s my home. I once went to the seaside with my mother. When I was young, everyone was a cockney. It was like looking at the same face all the time. Now it’s all mixed up. I like it. Australians, Americans, Jewish, Blacks, Brazilians, Germans, it’s all over the place.’

‘I was born right by Old Street roundabout, in Hoxton, East London, on January 1st, 1927. Some of the kids used to beat me up – but in a friendly way. Hoxton was full of characters in those days. The Mayor was called Mr. Brooks and he was also a chimney sweep. Guess what? Before the Queen’s Coronation, he was putting up decorations and he fell off a ladder and got killed. Well, it happens.’

‘I’ve never had a girlfriend. It’s better that way. I’ve always had very bad catarrh so it wasn’t possible. And I had to care for my mother. Anyway, if I was married I would have been domineered all my life by a girl and that ain’t good for nobody’s health. You know that Bernie Ecclestone, from Formula One? He is really, really small. He was married to a Serbian girl who was six-foot-one. I say ‘lucky Bernie’. People always say that dark-haired girls like millionaires. My preference is very tall blonde Scandinavians. If they are Hispanic and really tall then I might just like them with dark hair. I would have liked to have had a girlfriend but it’s OK. I’ve seen the horse and cart, I’ve seen the camera invented, I’ve seen the projector. I never starved, that’s the main thing.’

‘I find all this modern art very strange. I’m not used to things I don’t understand, things what ain’t paintings. I like the old paintings. I’m interested in Renaissance – you know what that is? Things what are ancient. Anything between one hundred and three hundred years old. I also like things that are produced by Picasso, people like that. Toulouse-Lautrec. He was not too bad, but he had an unhappy life. Hey, do you know that Tracey Emin? She lives around here. You know that she stopped a skyscraper being built in Hoxton Square. I’d like to meet her.’

‘I worked two years as a cabinetmaker in Hemsworth Street just off Hoxton market. But when my sinuses got bad I went to Hackney Road putting rivets on luggage cases. My foreman was a bastard. Apart from that it was OK. But if I was clever, very clever then I would have liked to be an accountant. It’s a very good job. And if I was less heavy… you know what I’d like to be? I’d like to be a ballet dancer. That would be my dream.’

‘The best time to live in East London was in the Thirties. Although we was poor everyone helped each other. If your neighbour was ill you made them a plate of soup. Now someone might beat up your mother. We had a fish and chip shop opposite the bingo – it cost two pence for fish and chips, then we had that shop that sold pants and knickers. You had the tea company at the beginning of the Bethnal Green Road. You know Commercial Street? On the right hand side there was a policeman who was from Wales and he was called Taffy. Then there was Debbie Plotz, my friend, and her mother who was really fat, Habba Plotz.’

‘I don’t know what I would do if I won the lottery. There is that children’s charity, what’s it called? I wouldn’t help them because they say the money goes straight to the terrorists. If I won a small amount of money I would give it to the Synagogue Burial Society – because I’ve got to pay for my own funeral. I’ve been paying into it for 35 years but every year they raise the prices. I could have buried a football team by now. I think I won’t pay it any more. What’s the worst that can happen? I die?´

‘In modern times, we all got to keep together. If America was to drop like a stone, then England would drop like a stone. Think about England. England ain’t got no coffee in the ground, she ain’t got no tobacco growing. If England had everything in the ground would we have visited anywhere else? No. If we had our own tea we woudn’t have invaded India. But then again, if we had everything we would probably have invaded ourselves. Oh well. If I went to the jungle and was very clever I would be a missionary and be a person that helps others. But I’m not in a jungle, so I go to the library instead.’

‘I don’t mind people taking pictures of me. But I wouldn’t let a girl take a picture of me. She might have a boyfriend. I don’t want any trouble. And who knows, he might think she wants to run off with me. You got to be careful where you go nowadays. Martin, if you want to take this picture you had better be quick. I don’t take a good photo when my bladder is full.’

‘What about those people that study the stars? That’s a very good job. I’m interested in the universe. It’s more interesting than rivets. If we sent a camera far enough into space we might see people with mouths in their necks and hearts in their heads. But the universe is a mystery, ain’t it? How did silver happen, how did copper happen, how did coffee begin? No one knows. The first thing that brought light was candles. Hey, if a meteor landed in Hoxton Square you think anyone could survive? Probably not.’

‘You know when you see the news and you see a man in front of Big Ben? He’s not really there. He’s in a studio. It’s all like that these days. They put a background to it, like in the war films when you see them running against something. Really it’s a screen that’s behind them. Nothing is real. Why are people so busy now? With modern technology we shouldn’t be so busy. We’re always looking at a screen but it’s not really there.’

‘Computers can start wars if you’re not careful. You press the wrong button and a bomb goes off. In my time, if a woman wrote on a typewriter and she pressed the wrong key she just took the paper out and put it in the basket. Now you press a button and the whole economy collapses. There is all different computers. There are ones that send satellites up in the air. They are really complicated. But the ones that you get at home – they are just designed to get your bills on. The Microsoft ones, they are harder to use. If they are in the hands of a madman they can be really dangerous.’

‘It’s very painful getting older. My neck hurts all the time and I can’t walk so easy. If I was rich or if I was a queen they would give me all these things to make it go away. They would save me. Nurse! Nurse! Where is everyone here? The corridors are totally empty. And there’s no left or right to these hospital beds, only the middle. When I sleep I gotta have all of me covered, just like this. Why do I like to not see anything?’

‘If I try, I can imagine the future. It’s like watching a film. They will make more canals to ease all the roads. But there will still be wars. Pavements will move, nurses will be robots and cars will get smaller and grow wings… you’ve just got to wait. They will make photographs that talk. You will look at a picture of me and you will hear me say: ‘Hello, I’m Joseph Markovitch’ and then it will be me telling you about things. Imagine that! I also have an idea that in about fifty years Hoxton Square will have a new market with an amazing plastic rain-cover. So if it rains the potatoes won’t get wet. I don’t know what else they will sell. Maybe bowler hats. Nothing much changes around here in the end.’

‘Me and my family used to go to Hampstead Heath to see the fair. We had ice cream. There was a parrot who used to swear at me. It was perfect. I remember falling into some stinging nettles. What’s all this about broken families these days? The most important thing is to stay together.’ 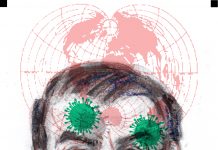